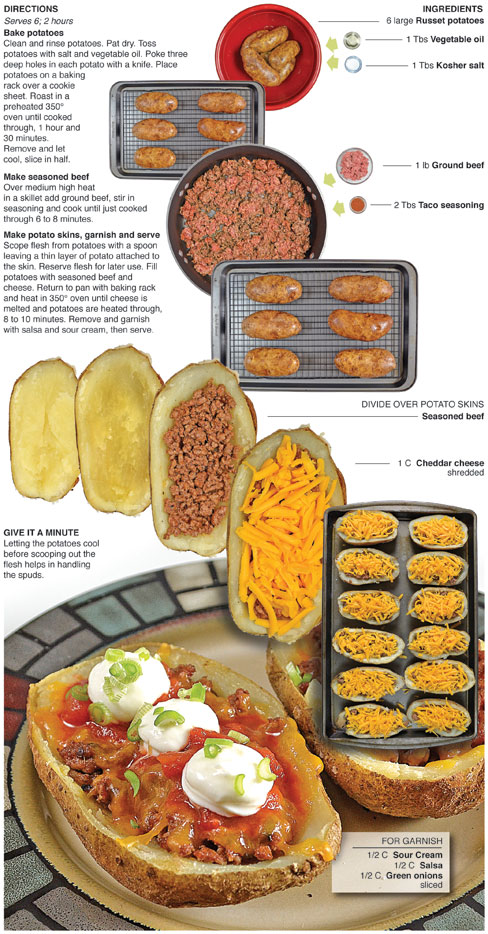 I love potato skins. And, I love nachos. What happens when you combine the two?

This recipe took potato skins, which is usually a side or an appetizer, and turned it into an entrée. The addition of the seasoned ground beef gave this a hardiness that allowed them to be the star of the plate. For a side it was way to much – unless your training for an Olympic gold in weightlifting. Two of these was more than enough to be the star of any lunch or dinner.

I have prepared baked potatoes on a rack in the oven with no foil wrapping several times now. Seasoning, venting and just letting them bask in the heat seems to be the way to go. Save the foil for cooking them on the grill or in a camp fire. Try the technique employed here if you like baked potatoes. It works pretty well and I think the results will impress.

Note: The taco seasoning is my own recipe, find it  here. 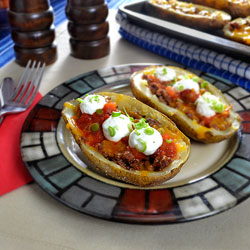 I made traditional potato skins a few months back and was careful to get the best pictures I could take. I knew that I could re-use photos from a basic potato skin recipe again because there is a number of toppings that can be applied to them. This is the first re-use of many of the potato shots and design techniques.

I went with a more artsy shot for the main art of the recipe instead of just a bird-eye view, which is something I have been doing a lot lately. The artsy shots at the bottom of the recipes give the overall work more depth. The planning ahead paid off with this one and saved me time, which allowed me to be a little more creative with the presentation. I should do a different potato skin recipe every week now that I have a template that works! 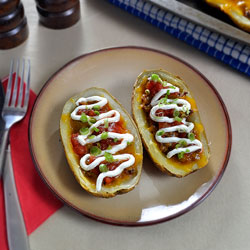 Bake potatoes
Clean and rinse potatoes. Pat dry. Toss potatoes with salt and vegetable oil. Poke three deep holes in each potato with a knife. Place potatoes on a baking rack over a cookie sheet. Roast in a preheated 350° oven until cooked through, 1 hour and 30 minutes. Remove and let cool, slice in half.

Make seasoned beef
Over medium high heat in a skillet add ground beef, stir in seasoning and cook until just cooked through 6 to 8 minutes.

Make potato skins, garnish and serve
Scope flesh from potatoes with a spoon leaving a thin layer of potato attached to the skin. Reserve flesh for later use. Fill potatoes with seasoned beef and cheese. Return to pan with baking rack and heat in 350° oven until cheese is melted and potatoes are heated through, 8 to 10 minutes. Remove and garnish with salsa and sour cream, then serve.
Posted by behindthebites@gmail.com