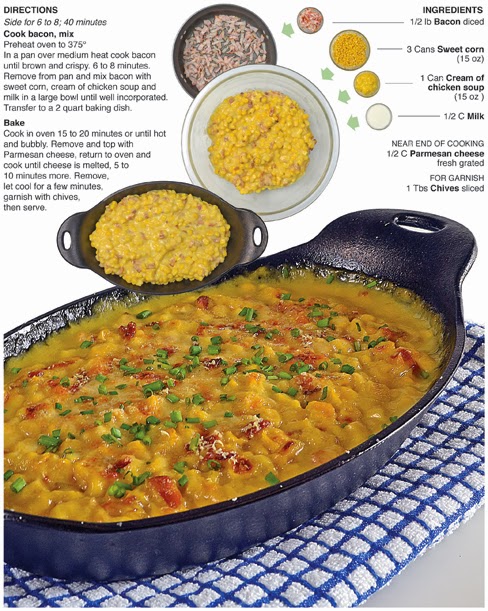 Of all my Thanksgiving sides this year, this was the most experimental. I had no idea how it would turn out, it was inspired by the classic green bean casserole, only I went with sweet corn and cream of chicken rather than green beans and cream of mushroom. The addition of bacon added a smoky and salty element to the creamy sweet corn mixture. I topped it with fresh grated Parmesan cheese and chives which added rich and oniony hints to the overall taste.

The dish was the most simple of all my Thanksgiving sides. Rendering the bacon takes longer than putting it together, and I baked it along side the dressing to kill two birds with one stone. I do think that another element could be added.

I’m not sure – but the addition of something like red or green pepper might punch up the flavor even more. I’ll have to try that next time. As it is, this is a quick and tasty addition to any Turkey day spread.

BEHIND THIS BITE
This dish is really the result of an over-stocked pantry. I closed my camper at our family campground at the end of October. Two of the things I brought home were three cans of sweet corn and two cans of cream of chicken soup. As I was trying to find room on the shelves, the idea hit me to combine the corn and soup and try it for Thanksgiving. I added the bacon for texture and flavor, much like the french fried onions add to green bean casserole.

On a side note, I was surprised that the mixture fit in the baking vessel I had chosen, which is pictured in the information graphic. I used the cast iron vessel strictly for aesthetics and to get a great photo. When I started pouring the mix in I thought there was no way it would all fit, but, to my amazement, it did. I had a similar experience with the dressing I made this year.

So, I have a tip: Some baking dishes may not look like they can hold a lot, but give it a try, you’ll be surprised at how much a two quart vessel or a 9 x 13 baking dish will hold.

Cook bacon, mix
Preheat oven to 375°
In a pan over medium heat cook bacon until brown and crispy. 6 to 8 minutes. Remove from pan and mix bacon with sweet corn, cream of chicken soup and milk in a large bowl until well incorporated. Transfer to a 2 quart baking dish.

Bake
Cook in oven 15 to 20 minutes or until hot and bubbly. Remove and top with Parmesan cheese, return to oven and cook until cheese is melted, 5 to 10 minutes more. Remove, let cool for a few minutes, garnish with chives, then serve.
Posted by behindthebites@gmail.com