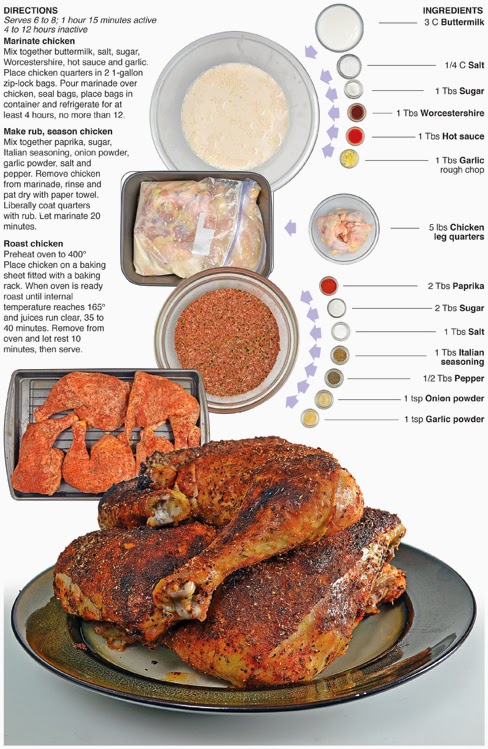 I was shopping for groceries recently and I stumbled across chicken leg quarters for 98¢ a pound. I picked up a package and went about my business. As I continued to shop, I realized that any other time I had bought leg quarters it was to grill, usually over a summer holiday weekend. Suddenly, I found myself wondering the isles thinking “what the heck am I going do with this chicken?”

My grill was covered with snow and Northern Indiana’s weather this winter has been more like what you’d find in the Himalayas. I decided it was time to experiment and roast them in the warmth of my kitchen rather than grill them and risk frostbite in the frozen tundra of my yard.

For this recipe, I make a dry rub similar to the seasoning found on barbecue potato chips. Also, I roast the chicken on a baking rack over a sheet pan allowing heat to circulate around the entire quarter and keep it out of the juices while it cooks. The end result is a well seasoned and perfectly roasted piece of chicken to devour.

BEHIND THIS BITE
I used this recipe for my print column but it contained only the rub portion. My space in the paper is limited so I decided to just use the seasoning part. This marks the first time I have broke apart a recipe and only used half for the paper. I have simplified recipes, but never left out a major part such as a brine or marinade like I have created here. I decided to do that because this rub is exceptional and is worth a try regardless of a marinade.

Soaking the chicken in buttermilk really does make a difference in the tenderness and moisture of the meat. I decided to add salt, sugar and a few select ingredients to impart flavor as well as tenderness. The end result was fall apart, juicy and flavorful meat. The buttermilk marinade, combined with the seasoning of the rub made for exceptional chicken. I can’t wait to adapt this recipe to the grill this summer.

Roast chicken
Preheat oven to 400°
Place chicken on a baking sheet fitted with a baking rack. When oven is ready roast until internal temperature reaches 165° and juices run clear, 35 to 40 minutes. Remove from oven and let rest 10  minutes, then serve.

Posted by behindthebites@gmail.com at 11:53 AM No comments: 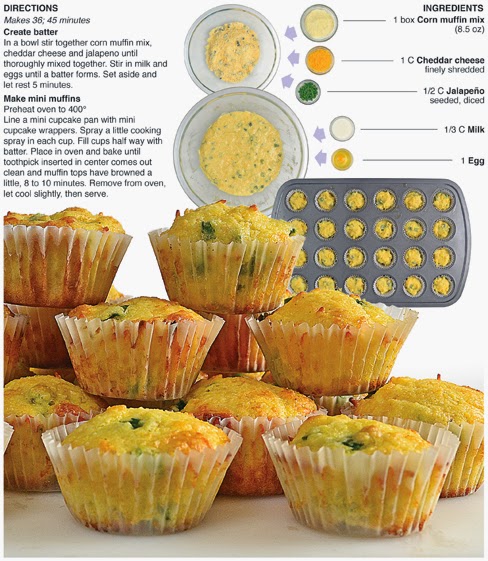 Make mini muffins
Preheat oven to 400°
Line a mini cupcake pan with mini cupcake wrappers. Spray a little cooking spray in each cup. Fill cups half way with batter. Place in oven and bake until toothpick inserted in center comes out clean and muffin tops have browned a little, 8 to 10 minutes. Remove from oven, let cool slightly, then serve.
Posted by behindthebites@gmail.com at 4:46 PM 1 comment: 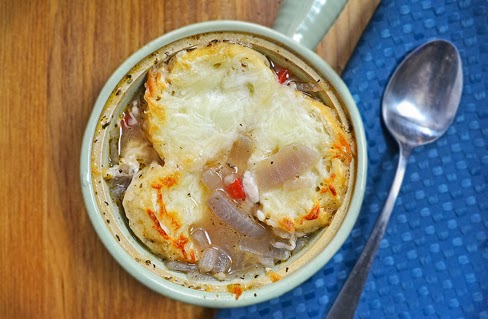 Make soup
Add red pepper and seasonings, cook until pepper is soft 3 to 4 minutes. Add broth, bring to a simmer and cook 15 minutes more. Remove from heat and spoon into oven safe bowls. Top with thin sliced pieces of baguette and shredded cheese. Place under a broiler and cook until cheese is melted and bubbly. Remove from oven and serve.
Posted by behindthebites@gmail.com at 4:46 PM 1 comment: 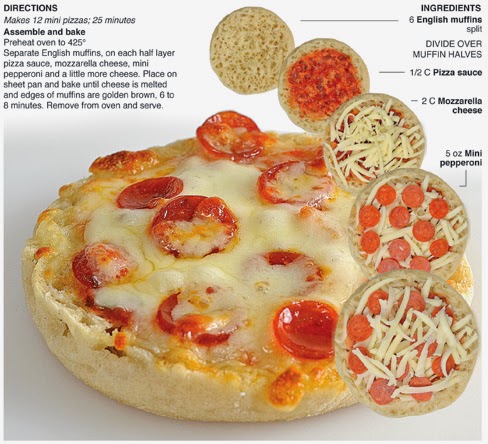 When it comes to a party, pizza is king. Whether it be a work party, school party, frat party or church party – pizza will always satisfy the crowd.

Super Bowl Sunday is not only a big day for football parties but more than likely the biggest day of the year for pizza parties. Domino’s Pizza will increase sales by nearly 80% over a typical Sunday and sell more than 11 million slices on the day of the big game. If you were to string those pizza slices end to end it would stretch the length of more than 21,000 football fields. Pizza restaurants in general will typically double their normal business on Super Bowl Sunday.

For this recipe, I take English muffins and top them with sauce, cheese and mini pepperoni to create a personal snack pizza for an easy pizza party treat.

The key here is to use the English muffins as the crust, any number of toppings can be featured to make custom pizzas. The muffin provides a quick alternative to pizza dough and a variety of toppings should help please all the different tastes that come from a room full of people attending a party.

BEHIND THIS BITE
This was really a simple snack to make and perfect for kids. It's a great treat for Moms and Dads to bust out when hosting a slumber party. Just put out a few toppings to choose from and each kid can have there own custom pie in just a few minutes.

I can’t wait to try this with my niece and nephews. They always want to help me cook but rarely do I have something for them to get involved in because most of the elements of cooking involve fire and knifes. Not here though, custom English muffin pizzas are easy and as kid friendly as food gets.

Assemble and bake
Preheat oven to 425°
Separate English muffins, on each half layer pizza sauce, mozzarella cheese, mini pepperoni and a little more cheese. Place on sheet pan and bake until cheese is melted and edges of muffins are golden brown, 6 to 8 minutes. Remove from oven and serve.
Posted by behindthebites@gmail.com at 12:30 PM No comments: 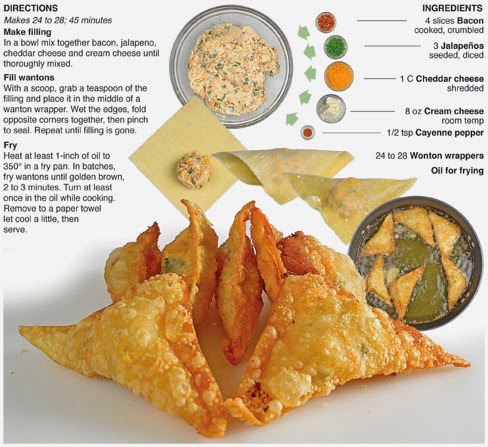 This is my favorite Super Bowl creation for 2014 - jalapeño wonton poppers. Which combines ... you guessed it ... Jalapeno poppers and wontons!

Wonton wrappers are paper-thin sheets made from flour, water, eggs and salt and are sold pre-packaged at most super markets. They can be filled with any number of ingredients or fillings and are usually steamed, boiled or fried. They are the Chinese cuisine equivalent to the Italian ravioli. The wonton is the perfect devise to deliver the popper filling for this recipe comprised of cream cheese, cheddar cheese, bacon, cayenne pepper and jalapeño.

Tradition poppers use either half or a whole jalapeño stuffed with filling and if you’re a popper fan like me, this means you may end up eating lots of jalapeños by the end of the night because they are simply to powerful to resist. Adding the jalapeño to the filling and using the wonton to deliver it requires much less of the spicy pepper and will help reduce indigestion caused by a spice overload.

BEHIND THIS BITE
I have passed by wonton wrappers a number of times in the last couple months, picked up a package and pondered what I should make with them, only to put them back and move on. This time I went to the store knowing what I wanted to do. I have learned to be careful when impulse buying unique items, like wonton wrappers, that are perishable.

I often buy things with the intent of making it in a couple of days or sometime during the week and the items sit in the fridge or pantry. The couple of days turns into a week and next week turns to two weeks and eventually what I bought has spoiled, dried out or wilted. I have gotten better at using everything I buy, but I still occasionally throw out an item or two. These wonton wrappers are easy to put off until tomorrow and very susceptible to being forgotten about until it's to late.

I know because it has happened to me twice in the last two of years.

So, if you’re not gonna make this recipe in the next couple days WAIT to buy the wonton wrappers. Don't just buy them to have 'em, they're easy to forget about and let go to waste.

Fill wantons
With a scoop, grab a teaspoon of the filling and place it in the middle of a wanton wrapper. Wet the edges, fold opposite corners together, then pinch to seal. Repeat until filling is gone.

Fry
Heat at least 1-inch of oil to 350° in a fry pan. In batches, fry wantons until golden brown, 2 to 3 minutes. Turn at least once in the oil while cooking. Remove to a paper towel let cool a little, then serve.
Posted by behindthebites@gmail.com at 9:38 PM 1 comment: