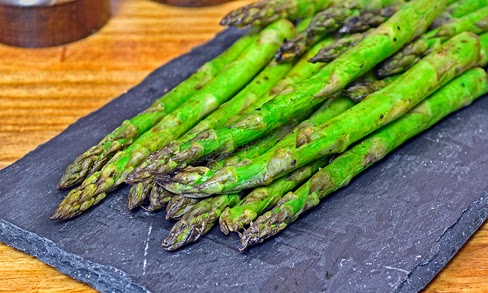 Yesterday, I attempted to document one of my go-to favorites – grilled asparagus. Any time I'm cooking a bunch of stuff on the grill at a gathering I grab a bundle, toss them in oil, salt and pepper and sear them lightly on the grill. I put them out first for people to snack on as I'm preparing more complex stuff and they're always a hit. I cook them just enough to brighten up the green color and soften them slightly. There is still lots of crunch left in the final product and they can be eaten like pretzel sticks.

They're simple and delicious!

So simple in fact, that I have avoided documenting them because there isn't much to document. As I shot the asparagus I knew that this was going to need much more planning than I had prepared for. The photos turned out ok but nothing I could use for a print recipe infographic. I had never photographed asparagus and I learned from my experience yesterday that this vegetable is gonna take some finesse to look good in front of the lens. I did get the shot above, but I was lucky to get that at best.

Rather than wait until I get a better handle on photographing asparagus, I'll give out the recipe – I can't keep it a secret any longer! It's so simple though that I'm not sure if it's a secret or even a recipe, all I know is that this is the way to eat asparagus!

Toss asparagus in olive oil, and season with salt and pepper to taste. Place on a prepared grill and cook 2 to 3 minutes per side or until just starting to soften and green color brightens. Remove from grill, lest rest a few minutes, then serve.
Posted by behindthebites@gmail.com

We spear four together with toothpicks so they don't roll around on the grill (one toward the end of the spears, one in the middle) and coat them with olive oil, minced garlic, and parmesan before grilling. Delicious.