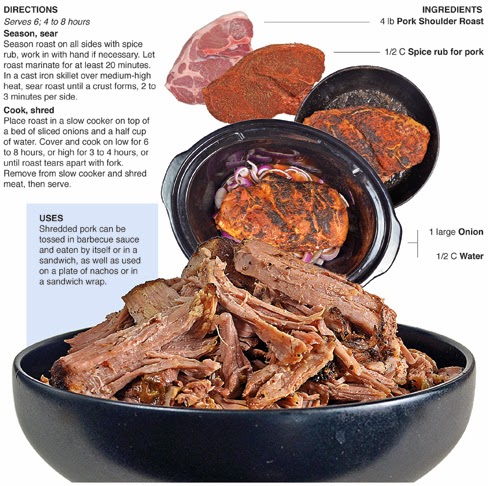 I was out grocery shopping recently and was looking for a bargain at the meat case. The best deal I could find was on bone-in pork shoulder. Considering that it’s July, I was hoping for something a little more grill-friendly and not so chewy, but I decided to go with it. A large cut can easily feed an entire family, or in my case provide a couple of different meals for during the week.

I used a simple homemade spice rub for seasoning but I could have just as easily used a pre-made rub found in any super market. I then seared the roast in a hot cast iron pan to create a flavorful crust on all sides. After that, I did the easiest thing possible in the world of culinary arts — Placed it in a slow cooker, walked away for hours then returned to find fork tender meat ready to be devoured.

It’s not as sexy as preparing it on a grill or smoking it in a barbecue pit but the end result is tender and juicy meat that can easily be used for sandwiches, nachos or just eaten by itself.

BEHIND THIS BITE
I had a number of different dishes in mind to make with shredded pork as the star. I had provisions to make sandwiches, tacos, burritos and nachos — I could have even made shredded pork egg rolls.

As I mulled my options over, one thing never changed – how I was going to cook the meat, and when push came to shove, I skipped all the foofoo and just went with the basic technique of making shredded pork to present here. I’m glad I did, because from this recipe I, or anyone that makes it, can take the pork and use it any way they choose.

Eventually, I made nachos and sandwiches with this batch. The nachos were tasty and different - it was the first time I had eaten shredded pork nachos and I can say with certainty it won’t be the last time I have them either, but I don’t want to say much about that – I’ll share the pork nacho recipe with my next post.

Season, sear
Season roast on all sides with spice rub, work in with hand if necessary. Let roast marinate for at least 20 minutes. In a cast iron skillet over medium-high heat, sear roast until a crust forms, 2 to 3 minutes per side.

Cook, shred
Place roast in a slow cooker on top of a bed of sliced onions and a half cup of water. Cover and cook on low for 6 to 8 hours, or high for 3 to 4 hours, or until roast tears apart with fork. Remove from slow cooker and shred meat, then serve.
Posted by behindthebites@gmail.com