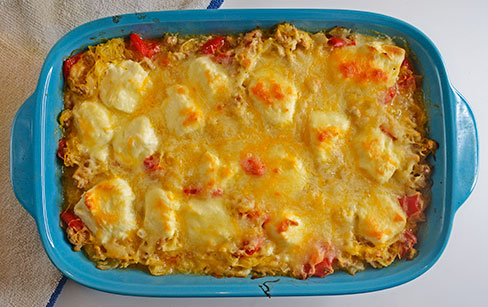 This was a treat. I loved it — and it was an experiment! I will be refining this for sure, but it's worthy of a post.

I made this recipe low-carb by using spaghetti squash where I would have used regular spaghetti. The squash worked with the onion and red pepper to form a nice vegetable base and the turkey gave it extra heft in the belly. The star here is the cheese though, specifically - the cream cheese. It's a decadent and rich addition that really binds all the flavors together. Next time I will mix in the cream cheese a little more thoroughly — I used dollops of it in this recipe!

If you like spaghetti squash you have to try this, or a variation of it.

Directions
Cut spaghetti squash in half length-wise and scoop out seeds. Drizzle with olive oil, season with salt and pepper to taste. Place on a baking sheet and bake in a pre-heated 400° oven for 35 to 40 minutes. Remove and let cool.

In a large skillet over medium heat cook onion and red pepper in a little olive oil until soft, 3 to 4 minutes. Salt and pepper to taste. Add ground turkey, breaking up and stirring occasionally until cooked through. 4 to 5 minutes more. Remove from heat and let cool.

Scrape spaghetti squash out of shell with a fork and into Turkey mixture, stirring to combine. Stir in 3/4 of the shredded cheese. Scoop mixture into baking dish. Top with dollups of cream cheese and remaining shredded cheese. Bake in a 350° oven for 30 minutes, or until cheese is bubbly. remove from oven and let rest 15 minutes before serving.