Get Rid of It Frittata 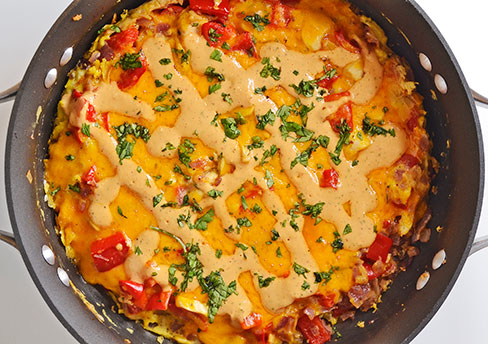 The only thing in this dish not leftover or standing on the edge of spoiled are the eggs and chipotle ranch sauce made a couple days ago. I think the Gods of fresh food smiled on my effort to not waste anything because I really enjoyed this. The onion and red pepper are really the star here with a moderate amount of chicken to add a little heft. Bound with eggs and topped with gooey cheddar cheese, this was a winner winner low-card dinner.

The binder
4 eggs (would have been six, but that's all I had.)

THE RECIPE
Turn on broiler

In a medium-sized pan over medium heat, saute the onion and peppers in a little olive oil until soft, 4 to 6 minutes. Salt and pepper to taste. Half way through toss in the chicken.

In a bowl, beat eggs until white and yolk are incorporated together. Once peppers and onion are cooked through, pour eggs into pan, shaking and jiggling to allow egg to get into space between onion, pepper and chicken. Let cook on stove top for 3 to 4 minutes or until egg at bottom is set. Top with cheese and place under broiler. Broil until cheese is melted and bubbly and egg on top is set and entire frittata is cooked through, 2 to 4 minutes. Remove from under broiler. Garnish with chipotle ranch sauce and cilantro before serving.

Posted by behindthebites@gmail.com at 2:23 PM