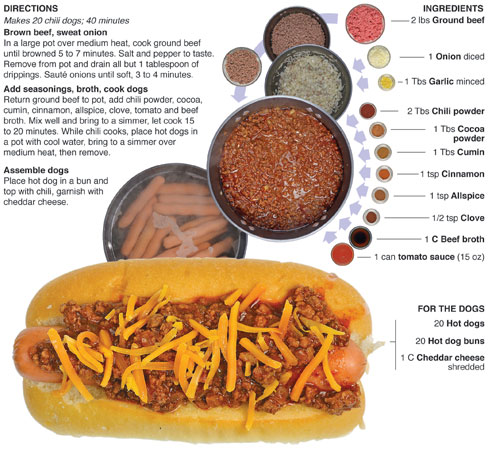 Chili makes me think of Texas but there is a version that was made famous in Cincinnati. Typically it is served over spaghetti with beans, cheddar cheese and diced onion and could almost be thought of as a sauce rather than chili. It was developed by Athanas “Tom” Kiradjieff, a Macedonian immigrant, and his brother John in the 1920s at their small Cincinnati restaurant which became known as Empress Chili, a name inspired be the business next door – the Empress burlesque house.

Unlike Texas chili that contains heat from peppers, Cincinnati chili features spices such as allspice, cinnamon and cocoa and is sweeter in taste.

Now that football is back and fall is just around the corner, I felt it was time to come up with a new chili. For this recipe, I make one inspired by the Cincinnati version and serve it on a hot dog. It’s the perfect dish to make for a tailgate party before a game or a gathering of friends around a campfire. I made it for lunch because I love chili dogs! 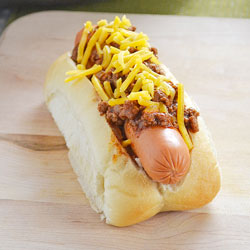 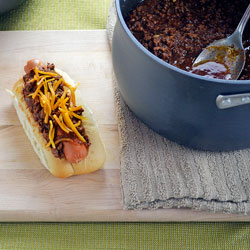 Memorial Day weekend this year I was out camping, but on Sunday I left for a while to watch the beginning of the Indianapolis 500 with my Dad, the race is his Super Bowl Sunday. He had made chili for some dogs as a snack for the race. Like me, he gets cravings for chili dogs every so often and the 500 was the perfect excuse. The chili had great flavor and after I complimented him, he showed me a spice packet used to flavor it. He had followed the recipe on the back to the tee.

It was Cincinnati chili. I was hooked.

I knew as soon as fall weather rolled around I would be making a batch from scratch for the column. The spices really make it stand out, the cinnamon and cocoa just make me want to grab a bucket and drink it down like a glutton on a beer binge. It is good by itself but I believe it’s best on a hot dog. The flavors mix well together and it really does resemble a meaty sauce like a bolognese, which is why I think it works best on other things like dogs or a plate of spaghetti. However it is eaten, it’s a great chili to try - especially if your a chili dog fan.

Directions
Brown beef, sweat onion In a large pot over medium heat, cook ground beef until browned 5 to 7 minutes. Salt and pepper to taste. Remove from pot and drain all but 1 tablespoon of drippings. Sauté onions until soft, 3 to 4 minutes.

Assemble dogs Place hot dog in a bun and top with chili, garnish with cheddar cheese.

I currently live in Cincinnati, but I am from Dayton, OH originally. Until I move here I never heard of Skyline or Goldstar Chili. People love it down here! I personally like hearty chili. I am not a fan of chili in this fashion but I am happy to see someone represent Cincinnati this way.