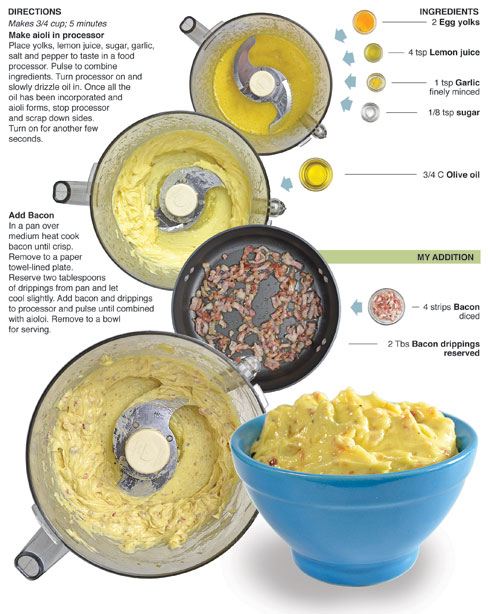 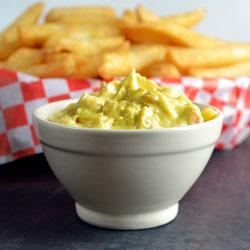 My last post was of a basic garlic aioli from Cook’s Illustrated. It was the first step in recreating a bacon aioli I had tried with french fries at Box Frites, a concessions stand at Citifield, home of the New York Mets. I wasn't hoping to recreate the sauce exactly, really, I just wanted to make a good bacon sauce.

I thought that it would be easy to change out a few ingredients and make the aioli from Cook's Illustrated in a completely different way.

My changes to the recipe were to eliminate the garlic then add bacon and some of the drippings. I first tried making it by throwing everything in the processor at once. The drippings screwed with the science of the aioli and the oil never emulsified. That meant the first batch went into the garbage. 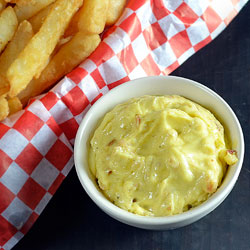 During the second attempt, I emulsified everything into an aioli, then added the bacon and drippings. So I basically made the aioli from the original recipe without the garlic. This was alright except that I used an olive oil that I don’t usually use because I ran out of my Felippo Berio brand. The less than stellar flavor of the oil and the missing garlic were noticeable. The overall batch wasn’t bad, but it wasn't great either.

That’s when I realized I needed to make the aioli according to the directions of Cook’s Illustrated, like I had originally, with good olive oil and mix in the bacon and drippings after the it was processed.

If it ain’t broke then don’t fix it!

I was hoping to invent a new sauce, but in the end I took a really good recipe from a trusted source and added bacon. I won’t use this for my print column or in a book of original recipes but it did make for a tasty sauce to dip some fries in. 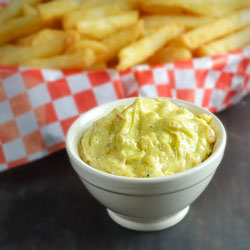 Make aioli in processor
Place yolks, lemon juice, sugar, garlic, salt and pepper to taste in a food processor. Pulse to combine ingredients. Turn processor on and slowly drizzle oil in. Once all the oil has been incorporated and aioli forms stop processor and scrap down sides.

Add Bacon
In a pan over medium heat cook bacon until crisp. Remove to a paper towel-lined plate. Reserve two tablespoons of drippings from pan and let cool slightly. Add bacon and drippings to processor and pulse until combined with aioloi. Remove to a bowl for serving. 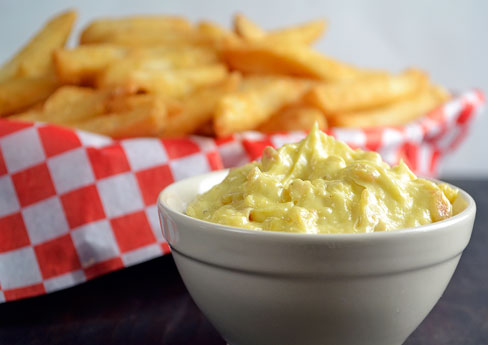